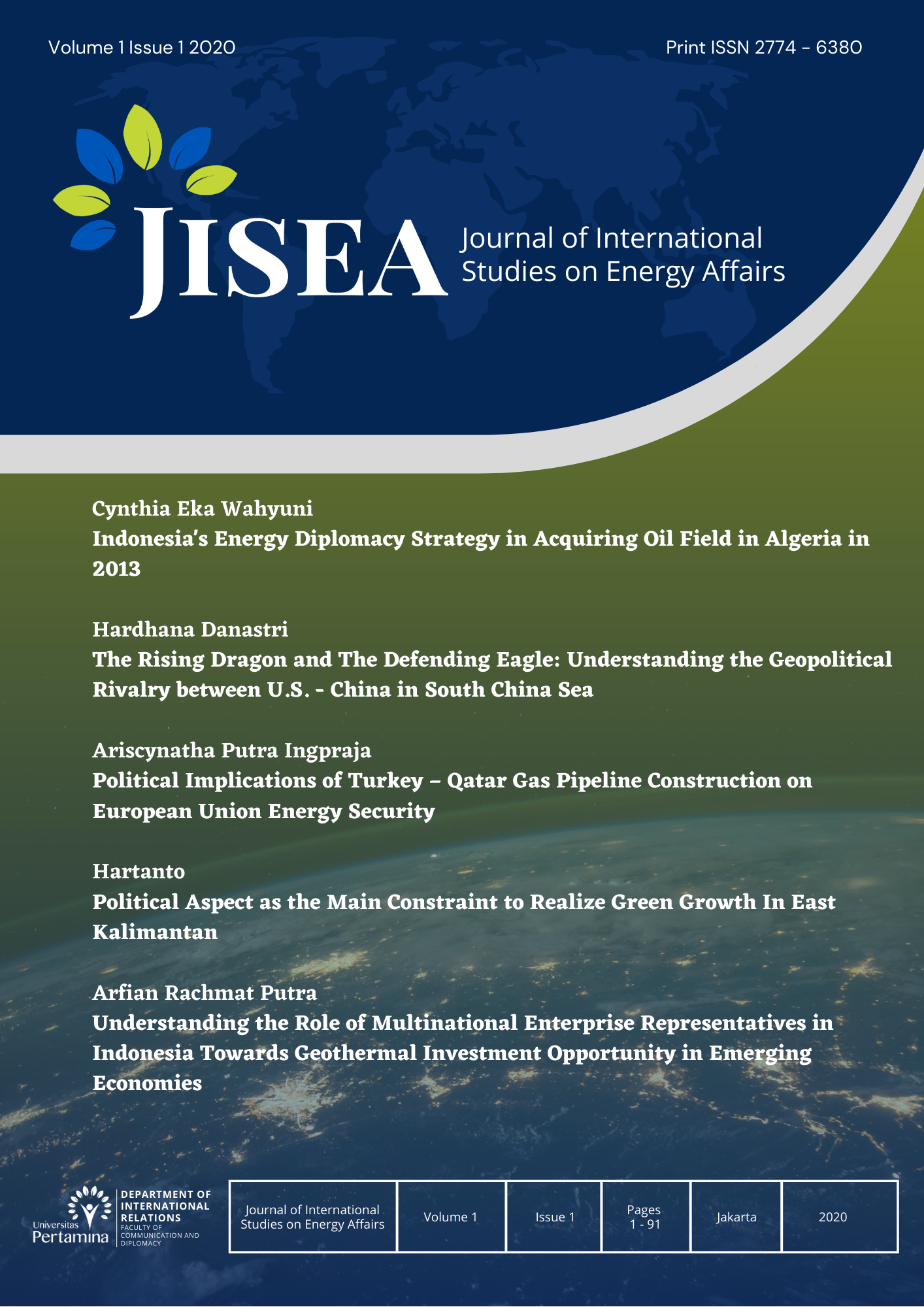 With great pleasure, we would like to present the inaugural volume of a new scholarly journal, Journal of International Studies on Energy Affairs (JISEA). This journal is more focusing on energy issues within the lenses of International Relations Perspectives, from theoretical aspects to empirical studies with the validation of current emerging phenomena. JISEA was envisioned and founded to accommodate the growing discussions of energy issues in the context of social studies, especially International Relations as energy had become a vital commodity that affects the states’ policymaking and implementation. JISEA aims to represent the result of thinking of the International Relations Scholars community, therefore it can span the gap between academic and policy approaches. JISEA is committed to a broad range of intellectual perspectives. Articles promote new analytical approaches, iconoclastic interpretations, and previously overlooked perspectives. Its pages encourage novel contributions and outlooks, not particular methodologies or policy goals.

This inaugural volume has the spirit to open a broader view on the energy issue and other international phenomena discussions. There are 5 articles published in this volume that exemplify a valuable point of view regarding the studied problems, particularly regarding geopolitics of energy, energy diplomacy, and renewable energy cooperation.

The first article, “Indonesia's Energy Diplomacy Strategy in Acquiring Oil Field in Algeria in 2013” by Cynthia Eka Wahyuni explains Indonesia’s strategy in implementing its energy diplomacy towards Algeria in 2013. To find oil fields that can be explored, the Indonesian government took a certain approach of diplomacy and negotiation with Algeria which has a tremendous amount of energy reserve. The concepts of grand strategy, energy diplomacy, and normative power were used to analyze Indonesia’s approach. The result of the research is that the Indonesian government plays a significant role in the acquisition of oil fields in Algeria in any technical process.

The second article, “The Rising Dragon and The Defending Eagle: Understanding the geopolitical rivalry between US-China in South China Sea” by Hardhana Dinaring Danastri elaborates on the competition between two major power countries in seeing the significant role of South China Sea. Both countries are thirst for controlling this area. The geopolitical strategy approach is used to analyze the rivalry to understand how both countries aim to strengthen their powers. In the conclusion, it argues that the South China Sea is important for China’s influence as regional hegemon, while the US uses the area to rebalance China’s rising power.

The third article, “Political Implications of Turkey - Qatar Gas Pipeline Construction on European Union Energy Security” by Arischynata Putra Ingpraja elaborates on the effects of energy cooperation between Turkey and Qatar regarding the Gas Pipeline towards the European Union. The article uses the perspective of Realism with the concept of states’ national interest to explain how Turkey can control the gas distribution to Europe. In the end, this pipeline construction will affect the energy security of European Countries in general, especially those who depend on the import of natural gas as the main energy source. The discussion result is that the building of gas pipeline has political impacts on European Union as energy importers.

The fifth article, “Understanding the Role of Japanese Multinational Enterprise Representatives in Indonesia Towards Geothermal Investment Opportunity in Emerging Economies” by Arfian Rachmat Putra analyzes the activities of multinational enterprise representatives in Indonesia, especially in encouraging investment in the geothermal sector. Indonesia has been known for its huge geothermal reserves in the world. Therefore, geothermal industries should be developed. However, Indonesia is still developing its regulation and working hard to solve its energy problems within society. By using the theory of investment and internalization, this article argues that multinational enterprises can help to increase investment.

We would like to express our gratitude to all the authors for their contributions to this journal. We also thank all scholars who were kind to provide valuable information and opinion on the review process. All the articles have been sorted through editorial staff who worked hard for the first publication of JISEA. We are hoping that the collections of articles will be a valuable insight for all of the readers. We will continuously invite all prospective authors to publish their papers on the upcoming issues.

The Rising Dragon and The Defending Eagle: Understanding the Geopolitical Rivalry between U.S. - China in South China Sea